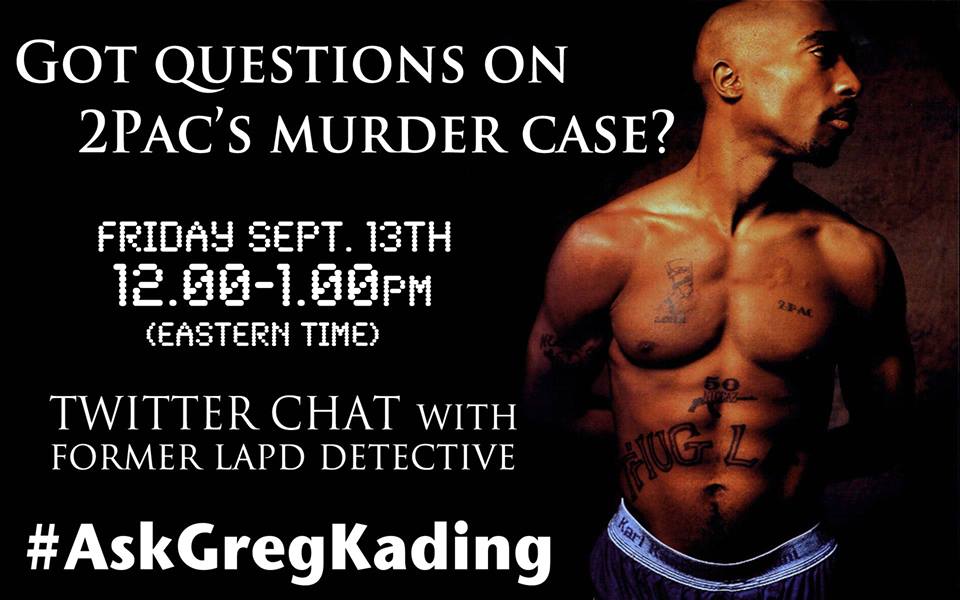 On September 13th 1996, legendary rapper Tupac Shakur passed away of internal bleeding caused by gunshot wounds. Next Friday, Sept. 13th, fans will commemorate the 17th anniversary of his death and former Los Angeles Police Department (LAPD) Detective Greg Kading, who researched the case, will respond to questions on Twitter at the first event of this kind he makes.

Spanish hip hop website SWAGGA MUSIC (www.swaggamusic.net), aware of the interest in Greg Kading’s previous interviews, has organized this event on Twitter to allow Tupac’s fans to ask their own questions to the former detective.

This event, called #AskGregKading, will be held on Twitter next Friday at 9.00 am (Pacific Time) or 12.00-1.00pm (Eastern Time). Anyone who wants to join can do so following these steps:

Greg Kading is a former LAPD detective who specialized in the fields of gangs, narcotics and homicides in the city of Los Angeles (California). After retiring, he published the book Murder Rap (2011), where he assures he knows who Tupac’s murderer is.

Tupac Shakur’s murder case is not officially solved, but Greg Kading, based on the evidence he collected during his years in service, claims that a man called Baby Lane shot the rapper and –this is one of the most commented parts of the book—, rapper and businessman Diddy –formerly, Puff Daddy– offered $1,000,0000 for this to happen.

On September 7th, 1996, Tupac Shakur attended the Mike Tyson–Bruce Seldon boxing match at the MGM Grand in Las Vegas, Nevada. He left the match around 11.00 pm and at approximately 11.15 pm, a white Cadillac fired gunshots at the rapper. He was taken to the University Medical Center, where on the afternoon of Friday, September 13th he died of internal bleeding.

SWAGGA MUSIC is a hip hop magazine, based in Madrid (Spain), focusing on U.S. hip hop with special interest in journalist content and interviews. Its audience consists mainly of Spanish-speaking people from Spain, Latin America and the United States, receiving thousands of visits every day.